I am the worst bedtime storyteller, the absolute worst, which is odd because I tell you riveting stories all the time. But that’s probably because I don’t have to tell them to you at bedtime.

By bedtime, I do not have the “loving silly snugly lingering-in-their-bedrooms” kind of thing going on inside me that the TV commercials suggest is how bedtime should happen. Bedtime has evolved into a chaotic lengthy adventure that always seems to drag on no matter how early I start or how I try to assert my parenting power and change things up. There are always one or two of my peeps who have last-minute needs. Yes, I know that I wanted three kids because I was way too in control and organized with just two and I thought that was no way to grow up. Turns out that they’re having a great time growing up and the cat and I have taken to hiding in the sunroom to escape the 24/7 life with kids we find ourselves in again under social quarantine.

Bedtime signals to my brain that at some point in the semi-near future, it can stop thinking. I can hit the off button. It can stop solving problems or saying something three times because everyone wants to know what someone else said. I can stop talking period. Bedtime is the time for probably my biggest sigh of the day…the sigh of sweet alone-ness.

Bedtime is also a trick. Once everyone is finally in bed and I think that I can climb into my own bed and put my hot corn bag behind my neck and shoulders, 9 out of 10 times, a voice will break into my stillness and have another need. Maybe they need to be tucked in one last time because they had to use the bathroom again. Maybe they are afraid and need to have a big stuffed buddy tucked in next to them.

And maybe, someone asks for a bedtime story to “relax them”.

I have been blessed by many parents, usually moms, who have told me to “enjoy them, they grow up too fast” and I do listen. It’s true. They do grow up too fast despite how long some of the stages seem to last. And parenting is an “all or nothing” adventure. They are with you 24/7 for years and years, and then suddenly, you are not tripping over toys, dealing with unending bedtimes and fixing food 24 times a day. Suddenly, the stillness I crave at bedtime will be with me all day. Right now, there is a part of me that could vacation in that stillness for a bit, but I know I’ll miss it when it comes.

Which, is why I dragged myself out of bed to go tell a relaxing bedtime story and scratch a small back. Someday too soon, no one will ask me anymore. As I headed to their bedside, my brain started thinking of what my story would be about. It can’t be scary or upsetting. It can’t even be too adventurous. It needs to be mild and just enough of a state change to help them ease the busy brains that they get at bedtime (who doesn’t?). For some reason, “Ned the Noodle” came to my brain as the main character so I began figuring out what Ned the Noodle was going to do.

Snuggle up, my BFF’s, and have one of those “now at home because of the Corona Virus” family members scratch your back while I relax you with my disturbing, disoriented, seemingly inappropriate no-sense-at-all story about Ned the Noodle.

“Ned was a noodle. A straight dried piece of spaghetti noodle who lived in a dark cupboard on the hard shelf all by himself. (I’m off to a great start, aren’t I?) When he looked around in the darkness, he could see only a few other things around him. A jar of spaghetti sauce, a can of black olives, and a tub of canned frosting. Far off he could barely make out the shape of a dried elbow macaroni that was also living on the same shelf. And there was a tall slim box with a clear window that looked like it held a lot of noodles who were exactly like Ned.”

As I told my story, winging every single detail and word, none of it flowing easily, all the while trying desperately to figure out where I was headed with this story, the look on my daughter’s face was priceless. She shares a room with her younger brother, the one who needed the story, and she was the lucky recipient of being in the wrong place at the wrong time. Just her face was peeking out of the covers that she was snuggled under with eyes that were not relaxed at all. I couldn’t really tell what was going on in her head. Her brother was silent. The room was silent and no one moved as they listened to my story. I wasn’t sure if that was a good sign but the story and I were going down together so I continued.

“One day, the cupboard was suddenly lit up and bright. Ned noticed that a big hand reached in and took out the jar of spaghetti sauce. Then it took the can of olives and the tub of frosting off the shelf and out of the cupboard. Space was opening up around Ned the Noodle. Even the lone dried elbow macaroni was taken out by the big fingers. Then the tall slim box with the clear plastic window and all the noodles that looked like Ned was lifted out”.

At this point, I really needed to come up with a good ending as I spoke. Nothing good would come of everyone being made into a spaghetti dinner or Ned being left behind. My kids were still silent, and my daughter was still looking at me.

Since you cannot really make use of large dramatic pauses in a bedtime story, I went with this…

“Then the big hand reached in and picked up Ned the Noodle. He felt himself being lifted into the air as he was brought out into the bright daylight. He saw that the jar of sauce, the olives and the frosting were on the counter. So was the dried elbow macaroni. And there was the tall slim box with a clear plastic window. The big hand was bringing Ned closer to the tall slim box and then he felt himself being lowered into that box. He was pushed in among all of the other spaghetti noodles and they cheered loudly and happily that he had returned home.

Yup. That’s it. That was the relaxing bedtime story I told. The look on my daughter’s face hadn’t changed. I prepared to kiss everyone and send them off to dreamland with their odd thoughts but my youngest asked for another story.

I was pretty pained and spent from the one I just ended and now I needed another one. My youngest supplied the character by asking for a story about a Panda. Fine. I could go with that but there is something deep in my nature that doesn’t like to be told what to do. I had to fight that feeling, this was a bedtime story and it was helpful and a perfect way for us to bond at bedtime. Honestly, he probably would have supplied the whole story if I were able to get over my issues, but I wasn’t, so I began a story about Pete the Panda.

It’s much more disturbing than my first one.

“Pete the Panda was a really big round roly-poly fluffy black and white panda. But…he had a fuzzy brown belly button.” (I warned you.)

At the mention of this, my youngest said, “I know what this story is about! He goes to school and is different but everyone likes him.” (Yay, maybe my life teachings are sinking in! What a nice little boy.)

And you would think his mother would have said “yes” and created a loving story with a nice moral but remember how I told you I don’t like to be told what to do? So I said “no” and proceeded to desperately figure out what words should come next. I was not going to tell a predictable bedtime story.

There is definitely something wrong with me.

My daughter’s face still had the same priceless look on it. 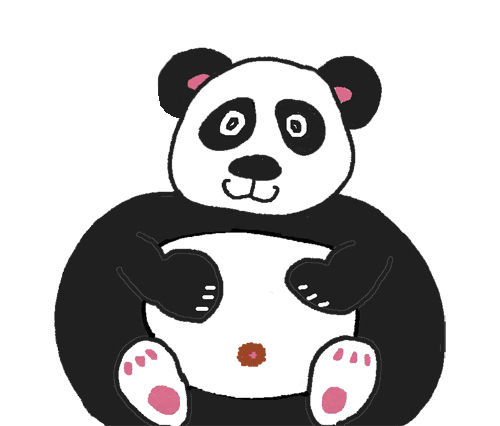 This sounds off-color as I write it but I assure you it was meant to be a child’s bedtime story. Pure, innocent and silly like any other bedtime story for children.

I am desperately weaving my tale as I tell it, completely unsure of where I am headed or how disturbed my children will be at the end of all this. And my kids are still silent.

“Toucan took out his treasures one by one to show Pete the Panda. He had a small pile of red berries to snack on when he was hungry, a special rock that he found and a pretty green leaf. Pete the Panda said that he kept treasures in his fuzzy brown belly button too. Toucan asked if he could see them.”

As I am sitting here typing these odd stories, at bedtime mind you, I am chuckling as I relive this moment. Even at the time, I wasn’t sure why I was picking odd body parts like belly buttons and armpits but I was a train wreck on a roll and I couldn’t stop. I just don’t do bedtime stories well.

“Well, how did that get in there?”, said Pete the Panda as he set the bug onto the ground. 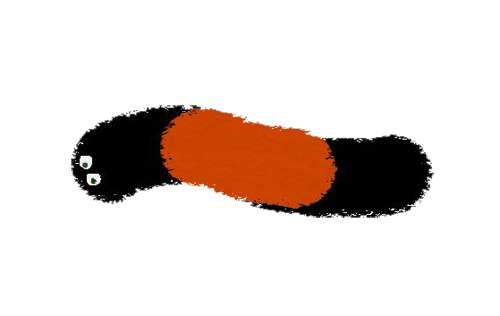 I added the drama by putting my gently cupped hand next to my own belly button and then extended my arm and hand for the kids to “see” the fuzzy brown Woolly Bear Caterpillar as I told the end of the story.

And if you are not already disturbed then this ought to do it.

The next day we were up at our farmhouse doing some spring cleaning and I noticed a Woolly Bear Caterpillar in the grass. I picked it up and tucked it near my belly button as I walked over to my kids who were having a snack at the little camping picnic table I dragged out for now. I started singing an “I love you” song as I was walking to them…

I asked them who it reminded them of and they knew it was Pete the Panda. They loved it.

Anything for a laugh I guess.

Let’s blame it on the social quarantine.

As I climbed back into my bed that night after I had finished my bedtime storytelling, I couldn’t help but laugh. My kids didn’t say anything as I kissed them goodnight and left their room. They were silent. I guess the point of a bedtime story is to get your mind off of whatever was keeping you awake and I had successfully accomplished that mission. I have always been the worst bedtime story teller. Disjointed, awkward, rambling and not cozy at all.

The funny thing is that my youngest told me the next day that he loved my stories and that I tell the best bedtime stories. My daughter agreed. Her favorite part was when I reached my hand out while telling the story to “show” them the fuzzy brown Woolly Bear Caterpillar and the voice I had used when I said that it was a “little woolly bear caterpillar”.

But I’m hoping not to get called for bedtime story duty any time soon though.